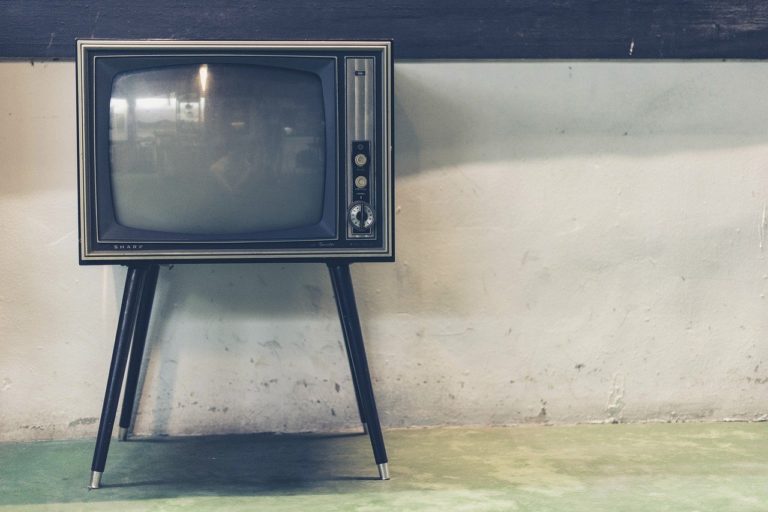 A relay station receives radio waves emitted from the broadcast station and sends them to homes for broadcasting. To make it easier to understand the difference between terrestrial and 衛星放送 [EISEI HOUHOU] (えいせいほうほう) “satellite broadcasting”. This broadcasting method, which uses terrestrial radio waves, is called 地上波 [CHIJOU HA] (ちじょうは) “terrestrial wave”.

The government has been promoting “digitalization of broadcasting” since 2003, and by March 2012, all terrestrial TV broadcasts were switched over from analog to digital. In order to watch these broadcasts 地上デジタル放送 [CHIJOU DEGITAL HOUSOU] (ちじょうでじたるほうそう) “digital terrestrial broadcasts”, it is necessary to connect a digital terrestrial tuner to the TV set, but most current TV sets have a built-in tuner.

Public broadcasters, on the other hand, maintain their operations by covering their costs with subscription fees from the viewers, which is the case with NHK, which goes to viewers’ homes and tries to collect the fees. 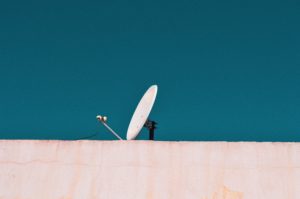 TV broadcasting using a satellite. Broadcasting is made possible by connecting radio waves from satellites located 36,000 km above the equator to a relay point and delivering them to homes.

In Japan, there are two types of satellite broadcasts: BS and CS. BS is short for Broadcasting Satellite and CS is short for Communications Satellite, and they are classified according to the satellites used.

The appeal of both BS and CS is their high-definition quality. In addition, CS offers a wide range of highly specialized channels such as sports and movies.

Satellite broadcasts include both paid and free channels, but BS broadcasts from commercial broadcasters are basically free, while NHK and WOWOW require a paid subscription. Also, a contract with スカパー [SUKAPA] (abbreviation for Sky Perfect TV) is required to view CS broadcasts.

It is a broadcasting method that connects cable TV stations’ centers and homes by laying coaxial or fiber optic cables to deliver broadcasts directly to households. It is also called 有線放送 [YUSEN HOUSOU] (ゆうせんほうそう) “cable broadcasting” because it differs from wireless broadcasting, and is often referred to as CATV.

In some apartments and condominiums, the building owner may install cable television in the building and provide it to tenants for free or for a fee.

Hikari TV is a service that distributes videos such as movies, dramas, and animations to your TV set using an Internet optical line. You can mainly use the service through Flet’s Hikari and optical access services provided by NTT East and NTT West’s Flet’s Hikari and optical collaboration companies. The major differences between this service and ordinary TV are as follows

(1) You can watch TV without an antenna or troublesome construction work!
You can enjoy various video contents by connecting your home TV with the optical access service provided by FLET’S and optical collaboration companies.

(2) You can also watch it on your smartphone or tablet by downloading a dedicated application!
Enjoy broadcasts, video on demand, and downloadable video content while commuting to work, school, or on the go, anytime, anywhere.

At a lower cost per channel than cable and CS broadcasting, you can enjoy a wide variety of video content, including 専門チャンネル [SENMON CHANNEL] (せんもんちゃんねる) “thematic channels”, 地上デジタル放送 [CHIJOU DEGITAL HOUSOU] (ちじょうでじたるほうそう) “digital terrestrial broadcasts” (except in some regions), BS broadcasts, and video.
Approximately 100 channels*1 of specialized channels and 88,000*2 of video-on-demand service content are available to broaden your viewing range.
1) As of April 26, 2019
2) As of April 1, 2019

If you use a dedicated tuner for Hikari TV (500 yen rental fee), you can also record a video.