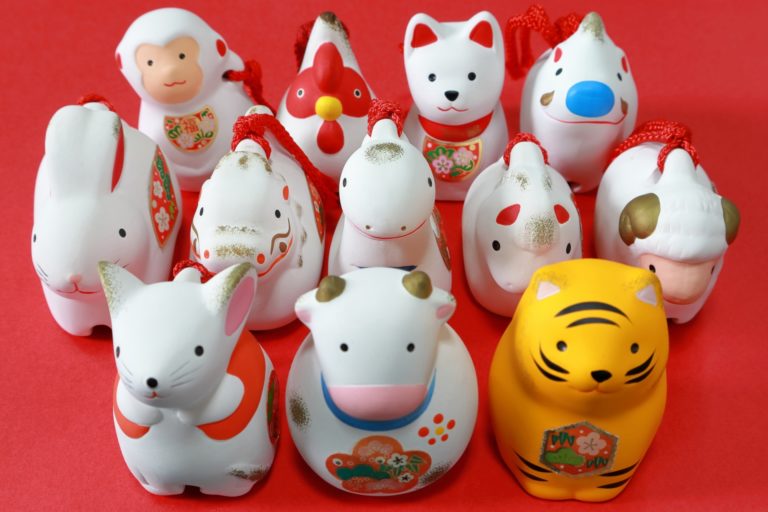 What’s the difference between ETO and JUNI SHI?

Also, when designing 年賀状 [NENGAJO] (ねんがじょう) “New Year’s cards”, it is common practice to draw the animal of the year.

1st year is the year of the [NE] (ね) = [NEZUMI] (ねずみ) – rat / mouse
Rats have a high fertility rate, and once they have a mating pair, they can multiply into dozens or hundreds of animals in no time. Therefore, they are often used as a symbol of fertility, and rats are associated with prosperity.

2nd year is the year of the 丑 [USHI] (うし) – ox
Cows have long been a partner in life rather than a food source. It was an indispensable animal in our lives, carrying heavy loads and plowing fields. The ox is a symbol of strength, tenacity, and sincerity.

3rd year is the year of the 寅 [TORA] (とら) – tiger
The tiger is a brave and courageous animal. It also has the meaning of decisiveness and resourcefulness.

4th year is the year of the 卯 [U] (う) = [USAGI] (うさぎ) – hare / rabbit
Rabbits have an image of docility and calmness. For this reason, it is a symbol of safety. It also has the meaning of leap and improvement due to its leaping ability.

5th year is the year of the 辰 [TATSU] (たつ) – dragon
Although it is the only imaginary creature, dragons have been a close motif in life in the East. In China, the dragon has been a symbol of power since ancient times, and Japan has been influenced by this. From this, the dragon has the connotation of power.

6th year is the year of the 巳 [MI] (み) = [HEBI] (へび) – serpent / snake
Because snakes grow by repeatedly shedding their skin, they have become a symbol of “eternity”, “life”, and “rebirth” in the world.

7th year is the year of the 午 [UMA] (うま) – horse
Horse, like oxen, was an important partner in life. It symbolizes good health and a good harvest.

8th year is the year of the 未 [HITSUJI] (ひつじ) – sheep
Sheep are animals that prefer to live in groups. Therefore, it is a symbol of family security.

9th year is the year of the 申 [SARU] (さる) – monkey
Monkeys are highly intelligent and have been believed to be messengers of God. Therefore, the monkey is an animal that symbolizes the wise man.

10th year is the year of the 酉 [TORI] (とり) – rooster / cock
The word “tori” means 取り込む [TORIKOMU] “to bring in”. It is treated as a symbol of prosperity in business. There is a festival called 酉の市 [TORI NO ICHI] (とりのいち) market  in many parts of Japan to promote business prosperity on the 酉の日[TORI NO HI] (とりのひ) “the day of Tori”.

11th year is the year of the 戌 [INU] (いぬ) – dog
Dogs, along with cows and horses, have been a part of our lives since ancient times. Dogs are particularly loyal to their masters, and are therefore a symbol of loyalty.

12th year is the year of the 亥 [I] (い) = [INOSHISHI] (いのしし) – boar
The meat of the wild boar has long been believed to be effective against all diseases and symbolizes good health. It also has an image of single-mindedness and passion.

The Chinese concept of 五行思想 [GORYO SHISO] (ごぎょうしそう) is based on the five elements of 木 wood, 火 fire, 土 earth, 金 metal, and 水 water, which are divided into two groups, 兄/陽 [E] and 弟/陰 [TO], to form a total of ten elements. The combinations of each element are as follows.