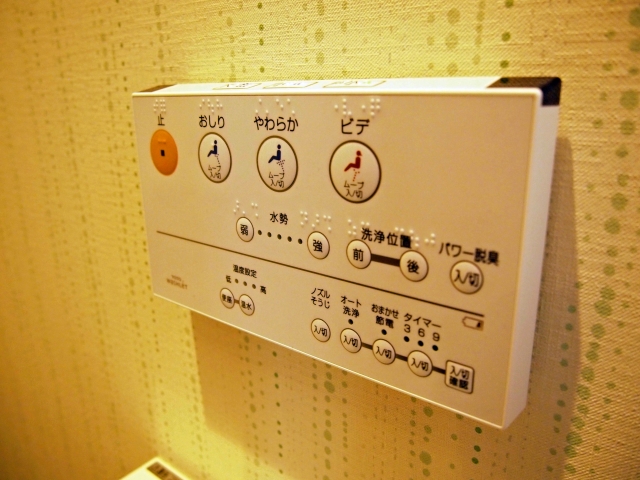 In 1964, TOTO imported and sold a “Wash Air Seat” from an American company called American Bide, which was a medical product for those with hemorrhoids that were too painful to wipe with paper or too big to wipe.

TOTO then worked to domesticate the product and in 1969 introduced the Wash Air Seat with wash and dry functions and a heated toilet seat. However, there were some complaints about the inconsistent hot water temperature and the angle at which it was hit was not good.

In the 1970s, the oil crisis hit, and the economy was in a slump. The momentum for a new product grew within the company, and in 1978 it was decided to develop the Wash Air Seat from scratch.

First of all, employees served as monitors to determine the position of their own anus in order to compile data on the position of their buttocks. After a period of trial and error in determining the temperature and angle of the hot water, a “golden rule” of 38 degrees Celsius and 43 degrees Celsius was established. Thus, in 1980, after only one and a half years of development, the ウォシュレット [WASHLET] was born.

However, people were reluctant to change from the familiar style of wiping with paper, and the Washlet remained unrecognized for some time.

Later, they evolved to include water-saving, energy-saving, and deodorizing functions, and some now have toilet seats that can even wash the toilet bowl.
After TOTO popularized the Washlet, manufacturers such as  LIXIL(INAX), Panasonic, Janice, and Takara Standard other than TOTO began to develop similar toilet seats.

Where can I buy Japanese Electric toilet seat (bidet)

温水洗浄便座 [ONSUI SENJO BENZA] (おんすいせんじょうべんざ) “Japanese Electric toilet seat (bidet)” can be purchased at home improvement stores and electric stores, and installation can be ordered there as well.

Can Electric toilet seat be installed in any toilet bowl? 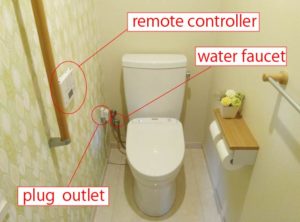 Installation costs range from 8,000 yen to 12,000 yen. If you need optional work, such as changing a stopcock or installing an electrical outlet, the cost will be higher.

温風乾燥 [ONPU KANSOU] (おんぷうかんそう) : Hot Air Drying : A feature that allows you to dry your buttocks with hot air after rinsing it with hot water. Less paper to wipe with and a lighter finish. However, this feature will cost you about 20,000 YEN more.

オートフラッシュ [AUTO FLASH] (おーとふらっしゅ) : Auto flash : When you stand up from the toilet seat, the sensor detects whether you are taking a large or small stool and flushes the toilet automatically. This function can be turned on or off. This is useful for households with many visitors, as unfamiliar guests may be looking for the lever.

自動開閉 [JIDO KAIHEI] (じどうかいへい) :Automatic opening and closing of the toilet seat lid : The toilet lid opens automatically when you approach the toilet, and closes when you leave. It opens and closes without touching the toilet lid, so you don’t have to sit in an uncomfortable position.